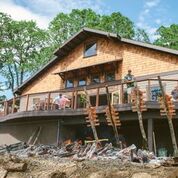 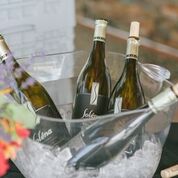 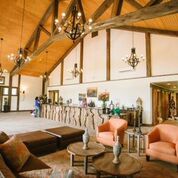 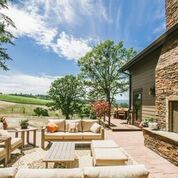 Boasting an enormous fireplace and surroundings of weathered wood and stone, the tasting room seems to?natrually bring the outdoors in. Set amidst the owners vineyard estate, Danielle Andrus Montelieu and Laurent Montelieu offer a homey feel for visitors and club members alike.?The grand?3,500 square foot tasting facility?features a private Members Only lounge, a commericial kitchen for events, a wrap-around patio and barrel room.

Sol?na Estate?s roots are deep. Beginning in 1999 as an engagement gift to each other, the story goes that instead of registering for china, the couple registered for Pinot noir clones to plant their ?Wedding Vineyard? instead. The 80-acre vineyard, located in Yamhill Carlton AVA is biodynamically farmed

In 2004, the first commercial vintage of Sol?na Estate was released and in 2009, they started construction of their new winery which they would eventually sell to the Jackson family in 2014. Moving just up the road to their charming lakeside location, Sol?na continues to make the same exceptional wines and offer the same generous hospitality, while the wines are now made at the Estate?s custom winemaking facility in Dundee.

Sol?na is open daily from 11-5, stop by for a taste, pull up a comfy chair, and stay for a while.

Urban Crush (www.UrbanCrushWine.net) located at 2025 SE 7th Avenue (in the old House Spirits Distillery), will be home to Angel Vine,?D’Anu Wines,?Willful Wines, and Cinzia, all of which will offer Pinot Noir as well as unusual-to-Oregon varieties such as Zinfandel (and its Italian cousin, Primitivo), Petite Sirah, Cabernet Franc, Sangiovese Viognier, and an Amarone-style wine made using modern appassimento methods. Tours and tastings will be enhanced by meet-and-greets with the winemakers who work there.

Urban Crush is situated in a Southeast district now in the early stages of highly-anticipated growth. This urban industrial area has been a hotbed of adult beverage production-micro-breweries, cideries and distilleries-and is home to many trendy new restaurants. This is also where the City of Portland will open its first new bridge since 1973, bringing an influx of pedestrians, cyclists and mass-transit commuters to this walkable neighborhood. Urban Crush will enter the mix as an integral addition to wine activity in PDX.

The way Laureen O’Brien sees it, her new Urban Crush Winery? in Southeast Portland’s next hot neighborhood, Hosford-Abernethy, conjures visions of “adults at play”- meaning that while winemakers are busy producing wine on-site, Urban Crush’s tasting room and wine lounge at SE 7th Ave. and Lincoln will be a destination that compels PDX’s wine lovers to revel in tastes of the wine made on the premises.

O’Brien and her husband, Ed Fus, owners of Angel Vine, have been focusing on producing Zinfandel sourced from premier Washington vineyards since 2007. Angel Vine, which also makes Pinot Noir grown on its estate vineyard in the Willamette Valley, will host several notable brands in producing wine in the heart of the city. “We want to make our wine where we live and become a part of the fabric of our community,” explains O’Brien.

Fus, the winemaker, lives with O’Brien in Portland. The couple travels frequently to the Willamette Valley to tend to their 5-acre Pinot vineyard as well as to their source vineyards in Washington, a three-to-five-hour journey. Now, says Fus, “Travel is shortened, since the Willamette Valley is in the opposite direction of our Zinfandel vineyards. Being a custom crush customer myself, I wanted to create something in Portland that was more focused on the winemakers. That’s what made it compelling to seek a place in PDX where we could become a foundational player and have a fun place to follow our passion.”

I?ll be completely honest, I?m generally not a huge fan of Pinot Blanc (except in Cremant d’Alsace, but that’s another post). Typically, I find it to be either a bit austere or just?rather bland. Don’t get me wrong, I don?t dislike it, but I don?t generally seek it out either. Really, I guess I just don’t give it much thought at all. However, when I tasted this small production wine at the SE Wine Collective in Portland (one of my favorite hangouts), I knew I had a mind-changer?on my hands.

Pinot Blanc is a full bodied white grown all over the world. In Alsace France, a 100%?Pinot Blanc?is actually quite rare, it’s often blended with other more aromatic varieties like Auxerrois. There are a number of Oregon wineries that make a 100% pure Pinot Blanc, and 5Q is one of the best I’ve encountered.

5Q Obscurity 2014 Pinot Blanc– Full of bright and clean citrus that accentuate rather than overpower the glass, and subtle notes of apricot and orange blossom. The wine is well integrated, perfectly balanced and with just the right amount of acidity to make your mouth water, it’s?heavenly with seafood, asian food (especially something with a hint of spice), cheeses, fritattas, corn on the cob and even pastas with cream sauce.

I applaud this wine as it made me stand up and take notice of a wine variety I would normally pass over. Love. Love. Love. And you will too.